These *are* the deleted Britney Spears Instagram posts you’ve been looking for! Full frontals along with some cheeky shots of her ass, and she looks awesome in all of them 😍

Clearly on a natural high after winning her lengthy court battle to be in charge of her own affairs, Britney is absolutely smashing it lately with her naked displays showing what great shape she is in at 40. It looks like you can make out her right nipple here (left as you look at the pic), and that’s possibly a reason for the mods at insta deciding to remove the nude photo even though she has stickers covering her other breast, and pussy – which as you can see is still shaved completely bald 🧐 You can see all her past escapades where she fully flashed her clean shaven vagina inside the members area here. And speaking of things to eat (seamless!) – here’s the second of the full frontal nudity that the pop queen posted, where she gives her boob more of a squeeze, and opens her legs a bit more. A shame that damn heart sticker is covering up her spread legs right where her cunt is, and it’s probably why this nude picture got pulled. They also have a rule there about ‘sexual nature’ as well as actual nudity, and it’s a fine line to walk. Those thighs look nice and firm though, and that’s also a pretty sweet handful of breast Britney has herself a hold of: Britney’s pretty little peach in a skimpy red thong was the subject of these 3 photos that got removed from instagram, here they are uncensored to see if anyone can work out just why the hell they were taken off the ultra prudish platform. Ok so we can see both ass cheeks, she is obviously topless, but surely displaying your butt while wearing nothing but heels and a g-string is acceptable these days? Apparently not! Looking very much hot to trot, seems as though the ass pics were taken by her man, who if anything like me, was jacking off the whole time he was taking them. Maybe that’s why I’ve never been a glamour photographer 🤷‍♂️ So there we are, the latest Britney Spears naked offerings, of which the full frontal naked shots were deleted in less than 24 hours of being posted. Maybe Brit needs to take in a few lessons from the Queen of risque instagram celebrities Kim Kardashian who seems to know exactly where the line is there. You can also keep on top of her (if only!) latest snaps at Britney’s instagram page 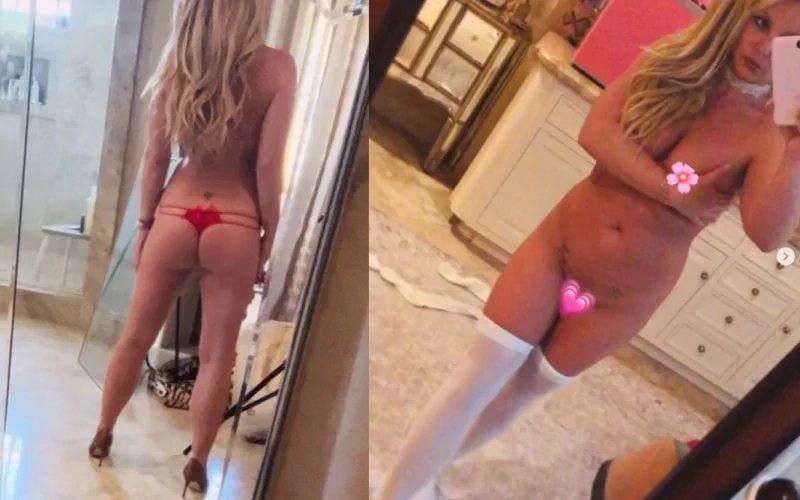